For the past six years, residential home prices in Las Vegas have been steadily inching upward. For the past eight months, the Las Vegas real estate market has been relatively stable, and home sales and prices have climbed steadily. Las Vegas developers are building again. New home construction is on the upswing — not booming — but it’s at an increase that encourages optimism.

For the past six years, residential home prices in Las Vegas have been steadily inching upward; they’re driven largely by institutional investors who have paid cash for low-priced houses ravaged by the 2008 housing downturn.

For the past six years, residential home prices in Las Vegas have been steadily inching upward.

Now, as home prices rise, and the institutional investors have largely pulled back from buying more, experts wonder if a slowdown in home sales or price is in store.

Keith Lynam, president of the Greater Las Vegas Association of Realtors, isn’t worried about the lack of institutional buyers. Lynam said the Las Vegas real estate market is steady and getting better. 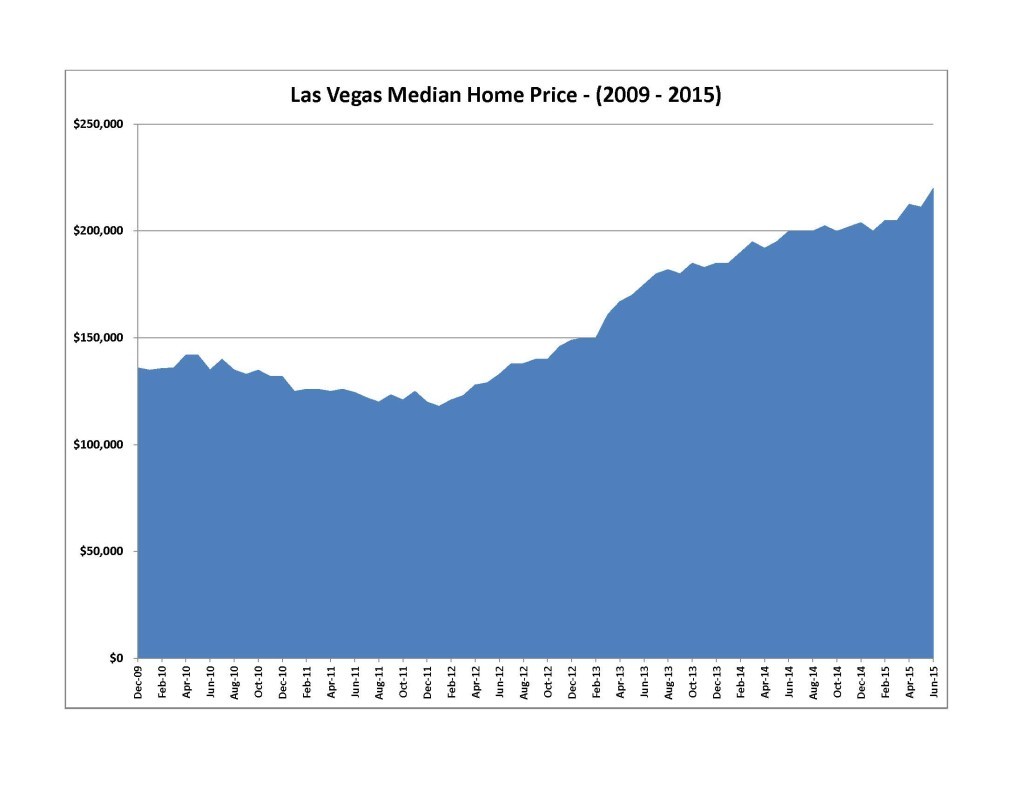 “For the last eight months, the Las Vegas real estate market has been relatively stable,” said Lynam, a Realtor with Platinum Real Estate ProfessionalsÂ in Henderson, Nevada. “The biggest trend for us is stability. After the roller-coaster ride we had with the housing downturn, it is great when we have stability. It’s stable now. We need stability.”

For the past eight months, the Las Vegas real estate market has been relatively stable.

(Read more about why Las Vegas real estate is on the rise.)

Sales and prices up

Home sales and prices in the Las Vegas Valley have climbed steadily in July compared to one year ago, according to the Greater Las Vegas Association of Realtors (GLVAR).

According to GLVAR, the total number of existing local homes, condominiums and townhomes sold in July was 3,815, up from 3,314 one year ago. Compared to July 2014, 20.4 percent more homes, but 5.5 percent fewer condos and townhomes, sold this July.

“Home prices have been increasing, but at a slower pace than the past few years,” Lynam said. “It’s also good news that we’re selling more homes throughout Southern Nevada this year than we did last year.”

Meanwhile, Las Vegas developers are building again, placing new bets on a return of the Las Vegas residential market. New home construction is on the upswing throughout the valley. It’s not booming, but the increase reflects renewed optimism in the market.

Developers are launching new projects and reviving massive developments that were derailed during the downturn, including several master-planned communities in the city’s exurbs such as Skye Canyon, a 1,700-acre northwestern development with 9,000 planned new homes near Summerlin.

Other projects that were delayed by the downturn and are back in business include Park Highlands, a 2,700-acre development being built in North Las Vegas. And Inspirada, a master-planned, 1,900-acre community, is taking form in Henderson, just outside Las Vegas.

In the mountains above Henderson another development is springing up. Homes in upscale Ascaya, the long-delayed luxury home community carved out of the McCullough Range, reopened last August after sitting dormant for years. Lots in the 313-lot development sell for more than $900,000.

Building permits on the rise

But according to real estate experts, the future of the homebuilding industry in Southern Nevada rests in the hands of the U.S. Bureau of Land Management (BLM), the federal agency that owns 81 percent of the land in Nevada.

According to data from the Congressional Research Service, the BLM owns nearly 57 million of Nevada’s approximately 70.3 million total acres.

Skeptics say the recovery is a mirage. Despite the recent sale and price increases this year, Las Vegas real estate market still faces many challenges.

Doubters of Vegas’ recovery point to the large number of vacant homes and underwater borrowers.

According to RealtyTrac,Â some 58 percent of Las Vegas borrowers are seriously underwater, meaning the mortgage debt outweighs the home value.

(Three new casinos are rising in the Las Vegas desert.)

Octavio Nuiry is the managing editor of RealtyTrac.