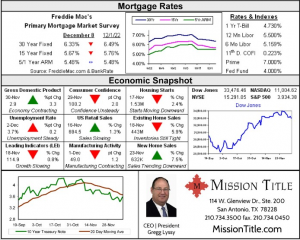 Rates managed to move slightly downward last week as recession fears grew amid hopes that the Fedis beginning to impact inflation. The ISM Services Index moved upward, and the Producer Price Indexcame in a bit over expectations. However, recent comments from the Fed have led the market toanticipate a 50 basis point increase at this week’s Federal Open Market Committee meeting.The Fed will be meeting in the middle of a week that also sees the release of the Consumer PriceIndex, Retail Sales, and Industrial Production. Experts are predicting that the inflation numbers willhold near last month’s 0.3% core increase, while other indicators point to economic slowing. Marketswill be focused not only on the Fed’s rate increase but on the Summary of Economic Projections (“dotplot”) that will be updated. If the dot plot reveals that the Fed is expecting to raise rates higher andhold them high for longer than previously expected, we could see mortgage rates returning to anupward trend. However, if the dots remain nearly the same, rates could continue to drift downward.