Just 10 years ago, easy credit and lax banking lending standards in the U.S. residential real estate market were partly to blame for a housing bubble that popped and caused over 7 million borrowers to lose their homes to foreclosure during the 2008 housing downturn, which triggered the Great Recession and unleashed a global financial meltdown.

Today, housing prices are steadily increasing again due to a shortage of new and existing homes for sale. And in some regions of the United States, home prices are seriously overvalued, especially in coastal communities such as San Francisco, New York and Miami.

According to Barron’s, home price increases have been fueled by real estate investors searching for yield in a low interest rate world and by foreign investors seeking a safe haven to store cash.

Rising home prices are bringing out more home flippers too. Last year, 180,000 home were flipped, according to RealtyTrac. Home flips increased in 75 percent of U.S. markets and accounted for 5.5 percent of all U.S. home sales in 2015. Last year was the first increase in flips in four years.

Now, the question many experts are asking is no longer if, but rather when and how far, home prices will fall in the coming housing crash. Nationwide, we are not in a bubble, but some markets are getting frothy, experts claim.

For years, it looked like San Francisco real estate boom would never end, but the tech go-go days might be slowing down, as home prices in the Bay Area have fallen for the first time in five years.

Home prices in the Bay Area have fallen for the first time in five years. 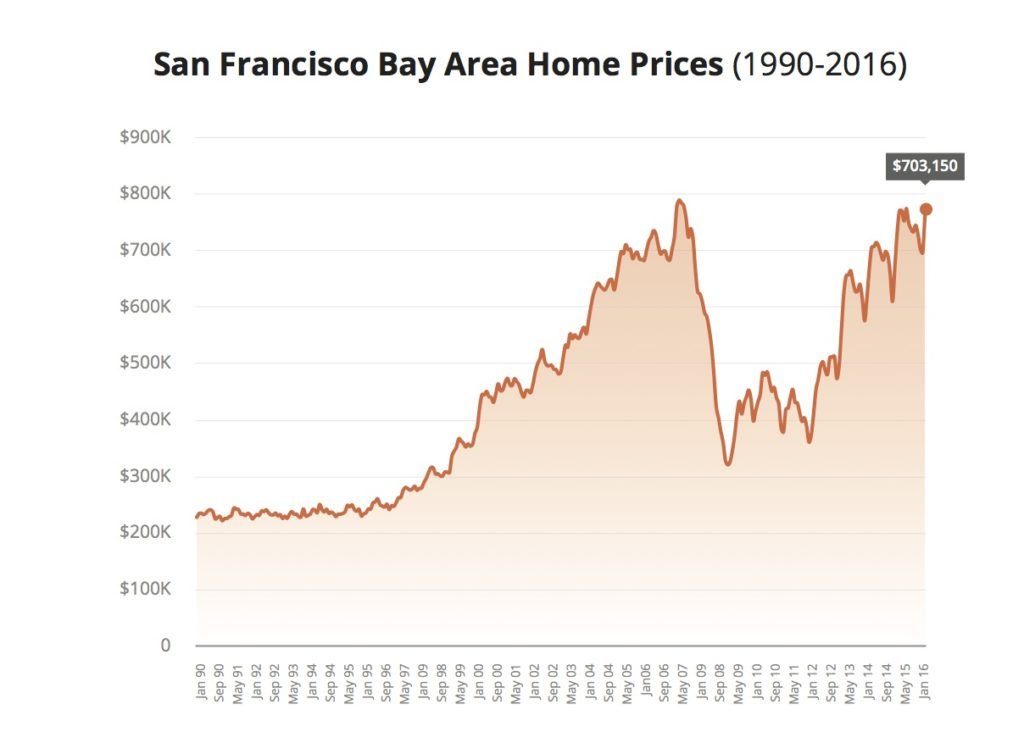 Statewide, only 34% of families can actually buy a home today in the Golden State.

The last time affordability levels were this low was in Q3 2007, when San Francisco’s housing affordability index reached 8 percent. Shortly after that, prices tanked, plummeting from nearly $800,000 in May 2007 to nearly $300,000 two years later 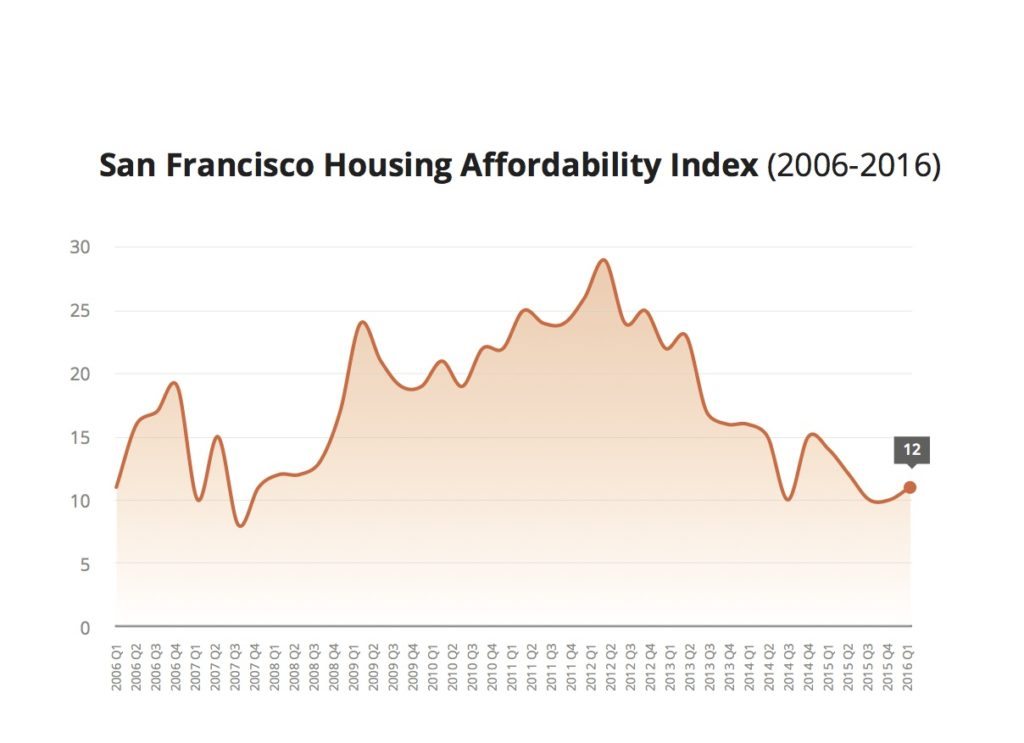 Thanks in large part to the rise of Silicon Valley, San Francisco is now a city of moneyed technology workers, where hordes of Chinese and Indian nationals, with their newly minted H-1B work visas, are flooding the Bay Area seeking high-paying jobs and unaffordable housing.

To understand how tech money is transforming San Francisco’s rabid housing market, look no further than the super-charged real estate market. As technology companies have moved in — Apple, Google, Facebook, Twitter, to name a few — the influx of high-paying workers has pushed rents and home prices through the roof. Google minted 1,000 millionaires when it went public in 2004. In 2012, Facebook’s IPO created 1,000 millionaires too. Twitter added 1,600.

But the San Francisco venture capitalists are starting to get nervous. Twitter is laying off people. Yahoo is for sale and downsizing too. Numerous other tech companies have started the same process. This year’s dramatic drop in tech stock sucked some of the life out of San Francisco’s real estate market and created conditions for further decline in home prices, according to local real estate experts.

“We have one of the strongest economies in the country,” said Rosen. “We’ve created 500,000 jobs in the last few years. And our real estate market is a demand-driven market. But when job creation slows, we’re going to see a leveling off in home prices.”

“New sales are 10 to 15 percent of the market,” said Miller, referring to the super tall skyscraper around Midtown on the West 57th Street corridor known as “Billionaires’ Row” and the clusters towers in the financial district and downtown. “It’s a lot more interesting to write about the sale of a $100 million apartment than a $2 million condo.”

In the first fourth months of 2016, NYC builders added another 4,200 new building permits.

In Miami, the Brazilians, Canadians and Russians have disappeared just as a new crop of high rise condo towers are hitting the market. Miami condo developers are starting to cancel projects, slash prices and offer incentives to spur sales, according to Jack McCabe, a Florida-based real estate analyst with McCabe Research and Consulting in Deerfield, Florida.

McCabe, who called the last housing crash a decade ago, believes the luxury condo market is in a bubble. He said the South Florida housing scene looks eerily similar to the 2008 housing bust, and the inventory of unsold luxury condos is ballooning.

But instead of the U.S. housing market taking down the global economy; the global economy will crater South Florida’s housing market this time, claims McCabe. “The last housing downturn was cause by the subprime loan crisis domestically that eventually turned into global recession,” McCabe said. “This time, the global recession is going to cause a U.S. recession. Here in Miami, 70 percent of the sales are to foreign nationals, most of which pay with cash. Only 10 to 15 percent of homebuyers are Floridians.”

With the disappearance of international buyers, McCabe worries that South Florida’s real estate market is drifting back into bubble territory.

“In the upper-end condo market, we are in the ninth inning,” said McCabe, using a baseball analogy to describe the slowing Miami luxury condo market.

“Sales numbers are dropping, prices are flattening, and we are starting to see the return of concessions by developers in the market such as private jet services to spur sales. South Florida is in a big bubble for high-end condos. We are at the end of the expansion phase and entering the hyper-supply phase, especially in condos.”

South Florida is in a big bubble for high-end condos.

Octavio Nuiry is the managing editor of RealtyTrac.