This year continued to break hearts as the world lost entertainment icon Carrie Fisher on Tuesday.

It’s no secret that I’m a Star Wars fan. A quick glance at my social media links gives that away.

I grew up in Kansas and dreamed, like so many in my generation, of that galaxy far, far away. The original films defined my childhood and made an incredible impact on my life. 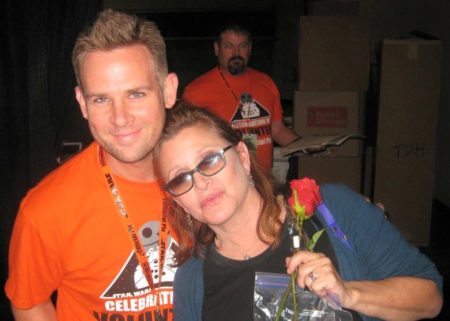 Through that hobby, I’ve assisted private autograph signings with Fisher at conventions in the U.S. and Canada numerous times over the last six years.

I feel incredibly lucky to have met a childhood hero, much less share hours of conversation with such a unique and powerful force.

As the world mourns Carrie Fisher, I wanted to share three quotes from the galaxy’s favorite princess, and the lessons I learned from her over the years.

1. “I was born into big celebrity. It could only diminish.”

Fisher, who died at age 60, had an almost fairy-tale entrance to the world, befitting of her later career-defining role of Princess Leia Organa in the Star Wars films.

The daughter of Hollywood royalty Eddie Fisher and Debbie Reynolds, Fisher started life with rare advantages. However, her father left her mother when she was 2, beginning a relationship with Reynolds’ close friend Elizabeth Taylor.

Thanks in part to that, Fisher was a bit of a quiet child, retreating to the comfort of books and poetry. At age 15 she made her movie debut alongside her mother, and her life would forever be changed.

Following the Star Wars rocketship to fame, Fisher found herself typecast. She was an early voice in Hollywood tackling the subject of how women are treated, the extreme pressures she faced regarding her weight and the challenges of fading stardom.

She would also say, “There’s no class to adjust to being less famous, and you don’t think you have to worry about it. But you do.”

When Hollywood stopped calling as frequently, she turned back to her writing. The initial result was the 1987 release of the film Postcards from the Edge, a satirical triumph inspired by her life and relationship with her mother.

She would go on to appear in assorted roles (often lampooning herself) while working to firm up screenplays for others. Her appearance in The Force Awakens last winter represented a comeback, one that Fisher worked extremely hard to prepare for both mentally and physically.

Real estate lesson: Whether you rocketed to the top or saw a slow climb, today’s superstar is tomorrow’s old news. Humility matters. Fisher begrudgingly accepted the spotlight but came to realize that being kind to others is a great way to feel better.

I saw her interact with hundreds of fans over the years and she always was charming, had a smile on her face and made sure that person knew that she appreciated them saying hello. In the last few years, Fisher was known to sprinkle glitter on fans as a way to bless them with happiness.

Avoid the ego traps that lurk around corners in the real estate industry and do what you can to make others happy. It often will cost you nothing but a little effort and selflessness.

Extremely outspoken about mental illness, Fisher had bipolar disorder. She self-medicated with decades of cocaine and prescription medicine abuse.

Fisher brought those battles to the public eye in hopes that her experiences could help others. Her memoir Wishful Drinking confronted these issues as she advocated for erasing the mental illness stigma.

A variety of medications in her later years — along with her constant companion, a service dog named Gary, who became a pop culture icon in geek culture — eventually eliminated Fisher’s substance abuse.

I saw Carrie last spring in Anaheim, one of the last times I’d have that pleasure.

She was appearing at the Star Wars Celebration convention and I was working to assist with the autograph hall. I, along with two others, conducted a marathon signing one night in Fisher’s hotel room.

As she sat on her bed, Gary napping at her side, she signed autograph after autograph while telling us stories about filming The Force Awakens, working with Harrison Ford both originally and again after over 30 years, her love of true crime television and how her mother still called often to check up on her.

She had noticeably lost weight (Lucasfilm demanded it of her and Mark Hamill, she said) and she was far more lucid than the previous time I’d seen her.

We’d all read Wishful Drinking, of course, and knew of her battles; however, she seemed quite proud to have things under more control.

Real estate lesson: The life of a self-employed contractor is not an easy one for most. Even when working within a great brokerage, it’s easy to feel alone at times, amplified by the need to “be present” on social media.

I have many friends in this industry who have battled depression, substance abuse, body image issues along with other personal and professional turmoil. Never forget that you’re comparing your life to everyone’s “highlight reel” on social media.

Please, if you find yourself grappling with any of the issues above, reach out and find help. You are not alone. Stop waging war with yourself and take the steps necessary to find happiness and self-appreciation.

3. “I have been Princess Leia exclusively. It’s been a part of my life for 40 years.”

With the resurgence of the Star Wars brand, Carrie returned to the screen as Princess Leia in last year’s The Force Awakens. That night in her hotel room, she shared that she’d never really stopped being Leia.

Returning to the role wasn’t an issue for her; the dynamic on set felt a bit like coming back from an extended summer break in school. The original cast easily rediscovered that chemistry on screen, but off screen was more uncomfortable.

Seeing Harrison Ford on set, she remarked to me that she didn’t know what to do. “Do I hug him?” she said, laughing. “He’s not exactly a touchy-feely guy.”

She had made peace with her life as Princess Leia in a way that Ford hadn’t with his role, though Ford was noticeably more upbeat about Star Wars while conducting press for new film than years prior.

Fisher’s acceptance seemed to grow as she rediscovered the bond with her fellow cast members, a uniquely shared experience that she protected.

Real estate lesson: You don’t have to be all things to all people. Embrace your specialty!

What makes you unique; what can you do better than anyone else? It’s the rare person who can be Harrison Ford: Han Solo one moment, then Indiana Jones, then back to Solo, then Jack Ryan.

Instead, be the strongest version of your authentic self. If you’re “Princess Leia,” be the best darn Princess Leia you can be. Don’t be afraid to grow, but trying to change the course of your business or follow trends can often do more harm than good. Focus on what works.

My condolences to Carrie Fisher’s family, her sweet service dog and the millions of fans whose lives she touched around the world.

To paraphrase something I read, instead of feeling grief, be thankful that out of all the millennia that you could have lived on this Earth, you were fortunate enough to do so while Carrie Fisher was here as well.

Bret Calltharp serves as Director of Consulting and Special Projects for Better Homes and Gardens Real Estate. He welcomes anyone (no matter what name is on your signs) to connect with him on Twitter or LinkedIn.