Home prices moving in one direction: Up

As many an economy and market has shown, uninhibited growth has to be stopped at some point — nothing keeps getting bigger and bigger without eventually reaching a stopping (or bursting) point.

They’ll be waiting a while, by all counts.

@CoreLogic: Home prices in the U.S. are going to keep expanding until further notice.

According to CoreLogic’s Home Price Insights Report for May 2016, home prices in the U.S. are going to keep expanding until further notice. 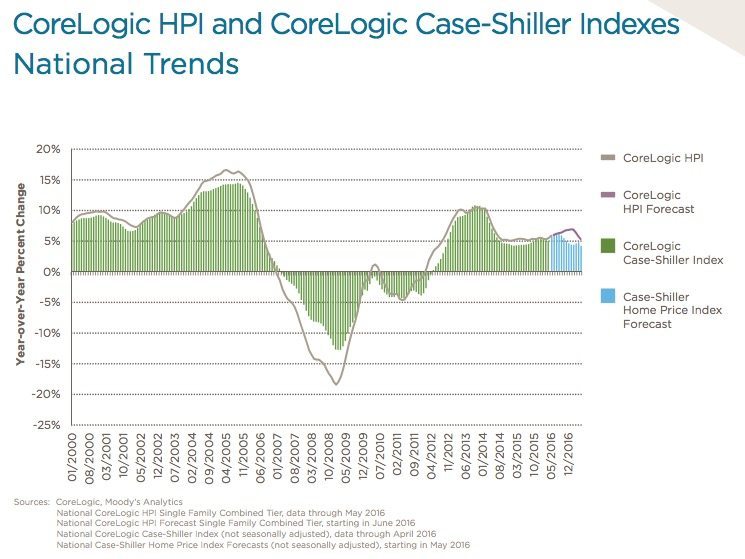 Home prices, including distressed sales, are up 1.3 percent month-over-month, and up 5.9 percent year-over-year. This is the 52nd consecutive month of year-over-year increases, although the gains are no longer in the double digits.

Furthermore, CoreLogic predicts that June’s home prices, including distressed sales, will rise 0.8 percent month-over-month, and that May 2017 gains will amount to 5.3 percent year-over-year.

“Housing remained an oasis of stability in May with home prices rising year-over-year between 5 percent and 6 percent for 22 consecutive months,” said CoreLogic’s chief economist Dr. Frank Nothaft in the report.

“The consistently solid growth in home prices has been driven by the highest resale activity in nine years and a still-tight housing inventory.”

National single-family home prices, including distressed sales, are 7.2 percent below the peak value seen in April 2006. But, national home sale prices are forecasted to reach a new price peak in September 2017.

Out of the major metropolitan areas, Chicago, San Diego and San Francisco home prices remain at a normal level, while Houston, Los Angeles, Miami and the DMV area (District, Maryland and Virginia) are overvalued — which means the HPI is 10 percent or higher than the long-term fundamental value for that market.

CoreLogic’s home price index uses public record as well as servicing and securities real estate databases and incorporates more than 40 years of sales transactions to analyze trends. Its home price index forecasts are based on a two-stage model that combines the equilibrium home price (as a function of real, disposable income per capita) with short-run fluctuations caused by market changes and other economic “shocks” — shifts in the unemployment rate, for example.