HUD: Housing market shows signs of strength across the board

The state of the housing market isn’t defined by any single factor but rather an array of interlocking variables. When the disparate parts are put together, what’s the bigger picture? That’s what Department of Housing and Urban Development’s (HUD) Office of Policy Development and Research reveals in its quarterly National Housing Market Summary.

For the first quarter of 2016, HUD concluded that as supply, demand, sales and affordability stabilize, the housing market is improving as a whole. However, the homeownership rate has dipped all the way down to 1985 levels as ripple effects of the housing crisis linger.

@HUDgov: The housing market continues to improve as a whole.

New construction starts for single-family homes rose 23 percent since last year for a total of 791,000 units in Q1 — their highest level since the final quarter of 2007. However, multifamily housing starts fell 7 percent from Q4 to 343,000 units, a number that’s still up 3 percent from one year ago.

New starts for single-family homes rose 23 percent in a year.

Despite low inventory woes, HUD noted a first-quarter increase in months’ supply of homes (a measurement that divides the total number of homes for sale over the number of homes sold in one month).

Home prices experienced their 19th consecutive quarter of increases but at a slightly slower pace, appreciating at 1.3 percent quarter-over-quarter and 5.7 percent year-over-year.

The NAR Composite Housing Affordability Index registered at 171.4 in the first quarter, up from 165.5 in the previous quarter.

Foreclosure starts (defined as default notices or scheduled foreclosure auctions, depending on the state) are down 15 percent from one year ago, according to RealtyTrac, while CoreLogic reported that equity grew by almost $1.2 trillion over the course of 2015. Moreover, during 2015, the number of underwater borrowers dropped by 1 million.

The homeownership rate is down to 1985 levels. 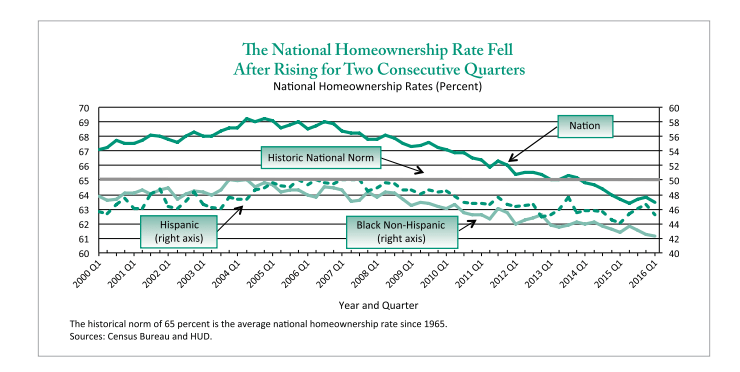 “Compared with the early 2000s, the current relatively low homeownership rates reflect the aftermath of the subprime lending crisis and the high rates of unemployment and underemployment as a result of the severe 2007–2009 recession,” the report noted.