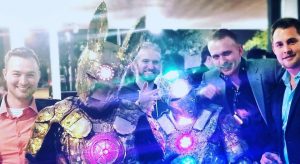 Deedcoin promises to disrupt real estate commissions by letting clients pay agents partly in its own digital currency tokens. Earlier this week, the startup announced it was officially on the books with the Securities and Exchange Commission to try it out.

The SEC granted Deedcoin a CIK number. The number will be used to track Deedcoin’s filings as the startup moves forward with its Initial Coin Offering after it started selling its tokens privately earlier this month. Deedcoin filed with the SEC on Jan. 19, according to the documents.

“Deedcoin strives to be a pioneer in regulatory compliance in the token launch world,” the company wrote in an email to followers announcing its news from the SEC, which Inman obtained. Deedcoin was founded in 2017 as an offshoot of Momentum Realty, a small investment real estate brokerage in Melbourne, Florida. Many of Momentum’s team are also now leaders at Deedcoin.

Buyers and sellers should be able to buy Deedcoin’s Ethereum-based tokens starting at $1.50 per token, and then use them to hire real estate agents nationwide. Agents who agree would then accept the tokens as payment in exchange for reducing their traditional commissions in U.S. dollars to as low as 1 percent, or an average of $225 per token used, the company claims.

The company also claims that these coins will rise in value, making them worthwhile assets for the agents and brokers who accept them.

Deedcoin says it has partnered with agents in all 50 states now, listing them on the following map. Buyers and sellers can use Deedcoin’s site to find properties where agents would accept Deedcoin or list their own property.

Deedcoin’s private sale started earlier this month, but its public sale is starting in 17 days, on February 18, according to its launch website countdown. The ICO date has been pushed back multiple times before.

While the government has cracked down on ICOs, accusing several companies of fraud, Deedcoin’s on-the-books number from the SEC gives the company some added legitimacy moving forward.