Underwater mortgages decreased as equity rose in May

When the housing bubble popped in 2008, it was especially bad news for homeowners with mortgages — those who’d bought just before the slump found themselves paying off mortgages on homes that were suddenly worth less than the mortgage.

That situation has been slowly rectifying itself. Black Knight Financial Services reported in its May 2016 Mortgage Monitor Report that the negative equity rate dropped to 5.6 percent in May, as 425,000 borrowers who had been underwater on their mortgages regained equity.

We’re still not clear from the effects of the recession.

However, we’re still not clear from the effects of the recession. The 5.6 percent number is certainly an improvement, but it’s about five times higher than the negative equity rate was in 2004. 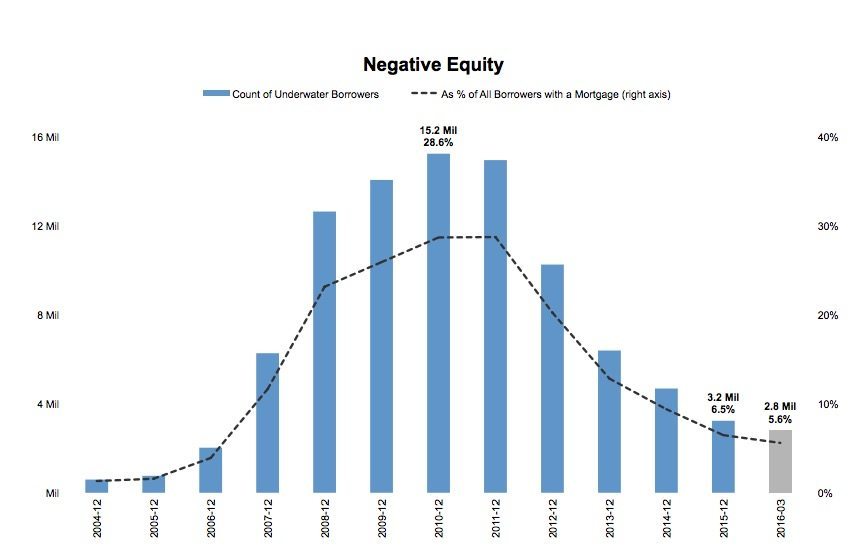 Black Knight data and analytics EVP Ben Graboske explained the substantial growth in equity levels as the nation has emerged from a distressing period of negative equity.

“As we approach the 10-year anniversary of the pre-crisis peak in U.S. housing prices, we’re just under 3 percent off that June 2006 peak nationally, and 23 states have already passed their 2006 peaks,” said Graboske. “The result is that equity levels are rising nationwide for the most part.

“In Q1 2016, 425,000 borrowers who had been underwater on their mortgages regained equity, bringing the national negative equity rate down to just 5.6 percent. That’s a far cry from the nearly 29 percent of borrowers who were underwater at the end of 2012, but still about five times as many as in 2004.

After a painful period of negative equity, the market has substantially improved.

“The first quarter also saw tappable equity grow by $260 billion — a six percent increase in just the first three months of the year. There are now 38 million borrowers who have at least 20 percent equity in their homes, with an average of $116,000 in tappable equity per borrower.”

The report noted that rising home values largely contributed to this growth in Q1 tappable equity. Whether homeowners are actually using the equity they have at hand, however, is another question. A February 2016 study by lender loanDepot revealed that many borrowers underestimate how much value their home has gained in the recovery.

“It seems borrowers are still being prudent when it comes to drawing upon that equity, though,” Graboske added. “Just $20 billion in equity was tapped via cash-out refinances in Q1 2016 — roughly one-half of one percent of total available equity. Even so, cash-outs still accounted for some 42 percent of all refinance activity in Q1 2016.”

The total U.S. loan delinquency rate, a measure of the number of loans 30 or more days past due, but not in foreclosure, rose slightly in May (0.36 percent), continuing its “gradual climb from spring into summer,” the report noted. However, the delinquency rate is still down 13 percent year-over-year.

Moreover, foreclosure starts grew by 6 percent since April, when they hit their lowest level in a decade, but are optimistically down 20 percent from May 2015.

And what about all the noise surrounding student debt and homeownership? According to the most recent full year’s data available, the share of total mortgage originations carrying student loan debt hit a new high in 2014 at 19 percent, a number that’s estimated to decrease slightly to 18 percent 2015.

“The rise in the share of originations going to borrowers with student loan debt is because of a change from a refinance to a purchase-heavy market from 2012 to 2014; as such, it’s something to watch going forward if and when interest rates begin to rise again,” the report noted.